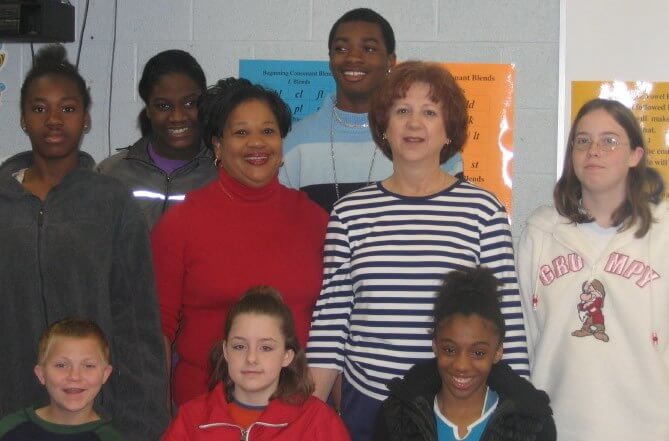 My students seem to enjoy the program.  They are especially proud when they spell nonsense words and sentences correctly.  I bought small white boards for each of them.  They do not use the boards for any other purpose than writing their words and sentences, so it seems like a treat to them. They all want to read the nonsense words!  They feel they have accomplished something when they read them correctly!

Our first 10 online lessons are free!

Vocabulary and Spelling Instruction from the Teacher’s Guide

Decoding words accurately (phonics), reading words fluently, and spelling words correctly are the three key skill strands developed in this phonics program.  English is a phonetic language because of the fact that our letters each represent a specific sound or in some instances more than one sound.  The decoding process consists of associating sounds with the already-known letters in the word and blending those sounds together to identify a word.  The activity of spelling reverses this process.   The identity of the word is already known; it is the spelling of the word that must be discovered.  The student first identifies the number of sounds he hears in the dictated word and then tracks or represents those sounds by writing the letters of the alphabet which represent the various individual sounds he has identified within the dictated word.  Spelling dictation is an intrinsic part of this phonics program; half of the instructional activity in this program consists of dictating the words from each lesson in the book to students. A major purpose in dictation is to establish for the student the direct and consistent relationship in English between letters and their sounds. Students also develop vocabulary skills during dictation; each word is dictated not only in isolation but also within the context of a sentence to illustrate the word’s meaning.

Decoding and spelling are actually opposite ends of the same process.  Decoding is the process of looking at and accurately identifying a written word.  Spelling, on the other hand, is the process of starting with identity of the word known and then accurately translating the known word to the letters that spell it.

Becoming a good speller takes longer than does developing decoding proficiency.  The reason that spelling requires a longer period of time to master than does decoding is because in spelling every letter in every word must be spelled correctly; there is no such thing as spelling a word almost correctly.  In decoding a word, a student can use the context of surrounding words in addition to his knowledge of phonics to determine the identity of the word in print.  But in spelling there are no context clues to aid the student.  A word might contain ten letters, and if a speller omits even one of those letters or incorrectly uses one wrong letter to try and spell the word, then the word is counted as being spelled wrong.

The key to mastering the skill of spelling is to understand that spelling is not primarily a process of memorizing words.  Spelling, instead, is a process of segmenting the sounds embedded in words and then matching those sounds to the correct series of letters and letter teams that represent those sounds.  We literally use letters to map out the individual sounds in words.  Never allow or encourage your students to rely on memory alone in spelling a word.  Memory is useful, but learning to segment words into their component sounds and then to associate letters with those sounds is the key to developing spelling mastery.

Students develop an awareness that spelling and decoding in our language are activities based upon a logical and coherent system of rules; students can then see that once they master an understanding of the logic and rules, they have the capability to learn both reading and spelling skills.  They realize that they are not being asked to memorize by sight thousands of individual words, a task that for many is impossible. This realization is of very great importance.  Students need to know that while the learning process upon which they are embarked entails a significant personal commitment and a great deal of time, it is not a process where no end will ever be within sight.  Instead with certainty and conviction students come to the understanding that the goal of learning to read and spell is an eminently realistic and achievable one.

The educated person has several learned vocabularies.  The spoken words a person uses in everyday speech are called an oral vocabulary.  A reading vocabulary, a vocabulary of words encountered in reading, includes words heard in conversation and also words normally not heard in conversation but words a person nevertheless understands.  As an example most people do not have the occasion to use the word syllabication in normal conversation though many individuals will immediately recognize and understand the word when they see it in print.  A third specialized kind of vocabulary is a spelling vocabulary.  A spelling vocabulary is a learned way to pronounce a word so that the pronunciation of the word conforms to the actual spelling of the word.  Students taught to pronounce words phonetically as they are spelling those words will spell with greater accuracy.

The first step to take in developing a spelling vocabulary is to note when the spelling of a word is at variance with the way a word is actually pronounced.  The word restaurant is a good example of this occurrence because the second and third syllables in restaurant are not pronounced as they are spelled.  The second and third syllables in this word are unaccented, meaning they do not receive the primary stress or emphasis as does the first syllable.  In English words vowels in unaccented syllables lose their clarity and thus tend to be pronounced with the schwa sound, which is in effect the short u sound.  Thus in conversation restaurant is pronounced /res/tuh/ront/.  For students to add the word restaurant to their spelling vocabulary, they must remember that there exists with this word a discrepancy between the way the word is spelled and the way the word is pronounced.  And further students must file away in memory the pronunciation of the word if the word were to be pronounced exactly as it is spelled.  Thus for restaurant the spelling pronunciation which must be learned and filed away for future use is /res/tau/rant/.

When spelling the word restaurant, silently pronounce the word phonetically as indicated by the letters in the word.  Silently say /res/tau/rant/.  The word is not pronounced as it would be in normal conversation where the clear vowel sounds in the unaccented second and third syllables are lost.  Silently pronounce the second and third syllables of the word restaurant, and be sure to pronounce them as their spelling indicates.  When spelling the word, the silent pronunciation must conform to the actual spelling of the word.  This technique of pronouncing words the way they are spelled rather than the way they are spoken is an essential method to use in mastering the skill of spelling.